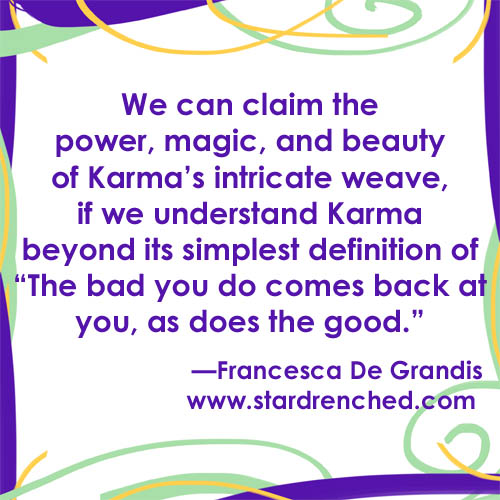 A misrepresentation of karma serves those who want others powerless and desire an immoral society.

It’s no surprise many people reject the idea of karma. An oversimplified understanding of it is disempowering—e.g., shaming people visited by unfortunate circumstances. Let’s look at a definition of karma that is empowering and joyful.

Karma is usually defined as “If you do good, good comes back at you. If you do bad, bad comes back to you.” While I believe that is an important truth, it is also so oversimplified as to be dangerous. Psychic physics aren’t that simplistic. Instead, it seems to me karma is the unfolding of the specific repercussions of whatever you do. Example:

Or you use the wood to build beautiful furniture, which you sell, and its buyers are happy, and you have money for groceries, which helps support the local grocer.

We’re all aware of the threats posed when too many trees are killed. Those threats, too, are possible repercussions. And, if cutting on a smaller scale, a space you clear can be a bane—or a boon—to the forest’s animals. If some of them leave as a result, each refuge will have its own impact on its new home. E.g., a possum who takes up residence in your yard could eat a lot of ticks, which might lower your chance of contracting Lyme disease.

Karma, as defined in this post, has three large benefits. It helps us
1) Understand that reality is an unfolding series of events that we affect.
2) Take responsibility for how much our actions impact the rest of existence (All Our Relations!).
3) Claim the beauty, power, and magic of such an intensely intricate weave.

Replacement of those three enormous strengths with “The bad you do comes back at you, as does the good” can rob us of power as well as the chance to be morally accountable for the chain reactions caused by our actions. There are also enormously positive chain reactions, in which we can take healthy pride. Misrepresentation of karma serves those who want others powerless and desire an immoral society.

Humility is also knowing one’s place in the universe, but not in the way it’s meant when someone tries to make you feel worthless by saying, “You better learn your place instead of being uppity!” When we understand karma, we can see our place in life’s weave in terms of our immense power to do good or wrong. Again, humility is acknowledging both your strengths and weaknesses.

Another way understanding karma can help us see our place: we might start to actually experience the incredibly vast and complex weave of life. That can be simultaneously self-enlarging and humbling.

Self-larging because we can see ourselves both as part of something magnificent and as a magnificent element of the larger magnificence.

Humbling because, for one thing, the grandeur of the cosmos provides perspective that can remove any over-inflation of self. For example, we might start to sense there are millions of factors influencing the outcome of any situation; we can see how powerless we are by comparison to all those factors. (I cannot use that as an excuse to avoid taking responsibility for consequences of my own actions.)

The humility gained by acknowledging the consequences of my actions and inactions, and by acting accordingly, improves my life. For example, when I make reparations for wrongs done, I more fully engage in life, which frees me from any unhealthy preoccupation with self that has trapped me; I get swept up in the World Tree—the larger picture, the Gods’ plans. Being caught up like this is humbling on some level. But it is also empowering and even ecstatic.

The idea of “Your good acts generate good acts coming back at you, and your hurtful acts generate hurtful acts coming back at you” remains important. But reducing Karma to only that ends up blaming and shaming good people for the unfortunate events they suffer. Life is more complex than that. The World Tree—life—is a sophisticated organism. It consists of many parts: branches, trunk, leaves, roots, bark, sap, etc. Those many parts are made up of innumerable cells. All this weaves together in a complicated synthesis. Our own actions are only a part of that tapestry.

There are constant contradictions that, in fact, are not contradictory. Each one, when riddled entirely by the intellect, seems unable to abide as a reality. But, if entered into as an experience, the supposed contradiction has the chance to be understood, because we get to experience it as a living, breathing fact.

Later, that reality may seem impossible again. That is because, when we retire too fully from action into intellect, we might lose touch with reality again. Our minds are wonderful tools to use constantly, but they get in our way when we think the only way to discover whether something is a truth is to keep it spinning in the mind instead of applying it as an experiment.

So it goes with understanding karma: sole intellectual analysis of it will not work. But when I try to live according to it, it makes sense experientially. That is one of a witch’s powers: to know something is true because you feel it with your gut and in your soul. Witches use their fine minds without being trapped by their limits; instead, we use the whole being—mind, spirit, and body. The following spell helps us do that.

Optional: after putting a purple candle in a candle holder, sprinkle a teaspoon or so of lavender by the holder’s base. If you prefer, use the candle and no herb.

Recite the following. To what extent you can manage, say it from the bottom of your heart.

May I honor and celebrate
my place in the weave of all existence.
May my Pagan heart thrill
to the beauty and magic
of the intricate, powerful weave that is life.
May I see the ripples from all I do.
May I take responsibility
for my place in the weave,
so that I act with good intention
and make reparation for wrongs I’ve done.
May I understand that these words I say echo through the World Tree, as do all words and deeds.

Now say, “So mote it be” (while lighting the candle, if you’re using one).

Let the candle burn down. Or extinguish it after a few minutes to relight again, should you want to repeat the recitation some time soon. If leaving the building or going to sleep, extinguish the candle and relight it when you have a chance. Never leave a burning candle unattended.

To explain the upcoming ritual, I need to start by sharing a personal vision of what I’m working toward in my own life:

I want to go the whole way, the last 9 yards—full happiness and prosperity, while of maximum service and burning off the last of my karma. I don’t want another incarnation.

I will go all the way to touchdown, at peace like a wolf howling at the moon or wrestling with its cubs.

I am a fey witch. I choose to be free. I do not bow to anyone’s opinion of me. I choose the wildness of my heart.

The vision describes what I want. Do you want it too, you untamed Faerie witch? We will work toward it together: Participate in my upcoming seven-week ritual. Run free with me.

I’m accepting fifteen people for this ceremony. To be one of them, there are some ideals to strive toward, or the rite will be wasting your time. Participate in the ritual if you will work toward these goals:

No excuses. No playing victim. Instead, take the next step toward your dream life, right away. Heck, maybe that’s choosing your dream life. Find what power you have—small or large—and use it right now.

Start now, no waiting. Great endeavors begin when someone says, “I’ll do what I can.” If all you can do is five minutes, that’s a legitimate start. Don’t wait to be you. The world needs you.

No one can fully achieve the above ideals. One of the goals of the ritual will be to empower you to achieve them. Know I am working toward them myself. I live them to whatever degree I can manage today. Today. Today. Join this group, then accept that you fall short—let go of ego. Ego keeps you frozen, not taking action. Accept your imperfections, so you can do great things today.

Though this post kicked off with a verbal expression of my vision, I’d like you to also see the vision and upcoming ritual represented by a painting: 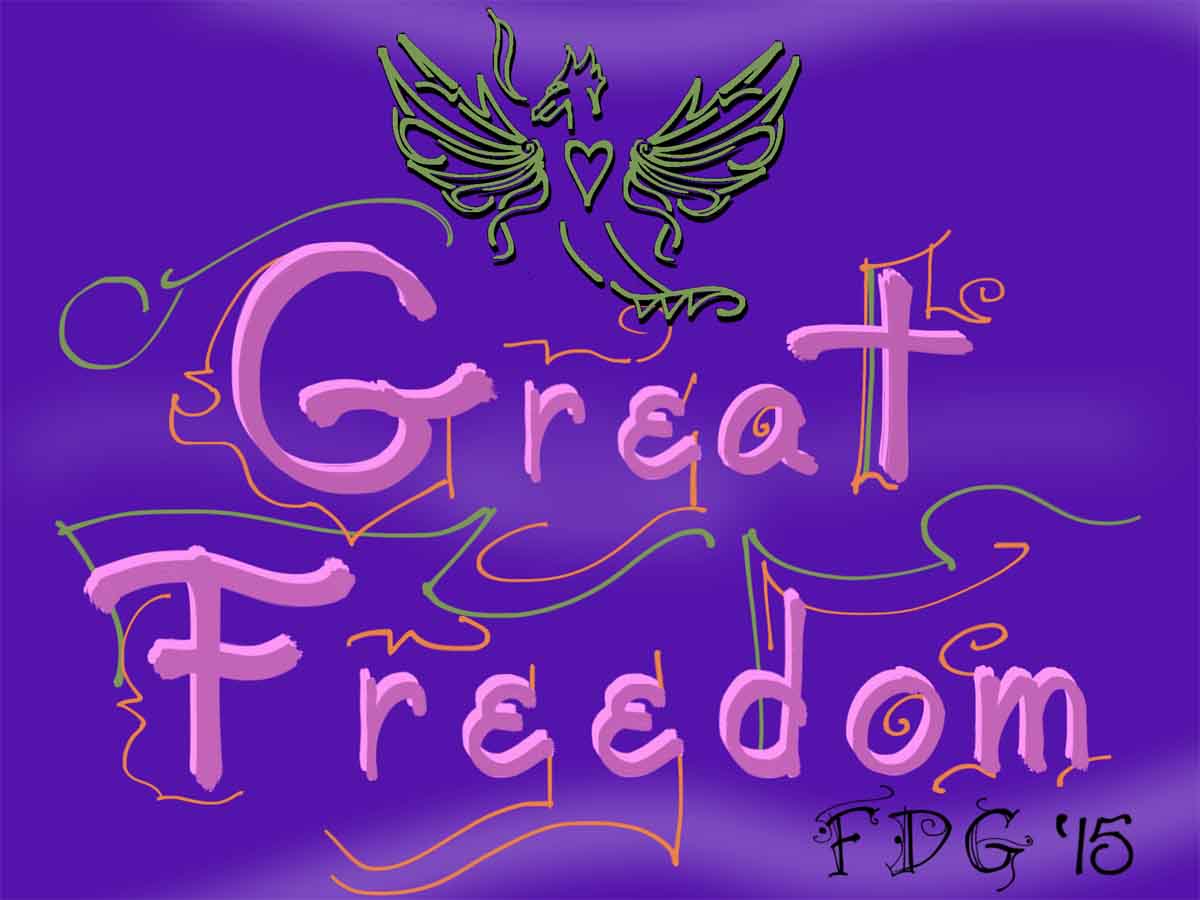 Our meetings will consist of
* full-tilt transformative ritual—we will rock ‘n’ roll,
* direct spiritual transmissions from me to bolster your spirit,
* and assignments tailored to your journey, challenges, and strengths.

This Third Road Faerie ritual qualifies as one of the two electives needed before advanced Third Road training. Not to worry: if this ritual doesn’t appeal to you, other qualifying electives will be coming.

Nuts and bolts:
* These are group meetings by phone. To participate, just dial the phone from anywhere.
* We meets seven consecutive Thursdays, from 6:00 to 7:00 pm est, starting Thurs March 31.
* Reserve Thurs May 19 same time, for a makeup session in case I’m unavailable for one of the planned meetings.
* Tuition: $250. Your usual long-distance charges apply, and appear on your phone bill. The event’s area code is a U.S. #.
* Upon receipt of payment, your place is reserved, and event phone #, etc., emailed to you. If you need more info, or want to discuss scholarship, trade, or payment plan, call 814-337-2490. No refunds.
* Scroll down to enroll: enter your phone number and pay securely with PayPal.