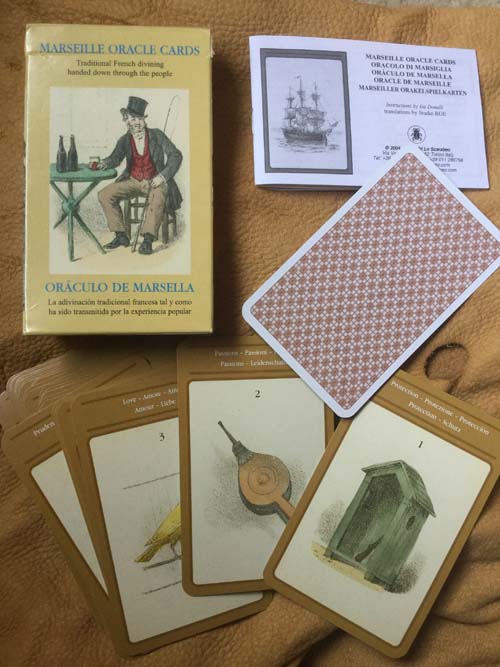 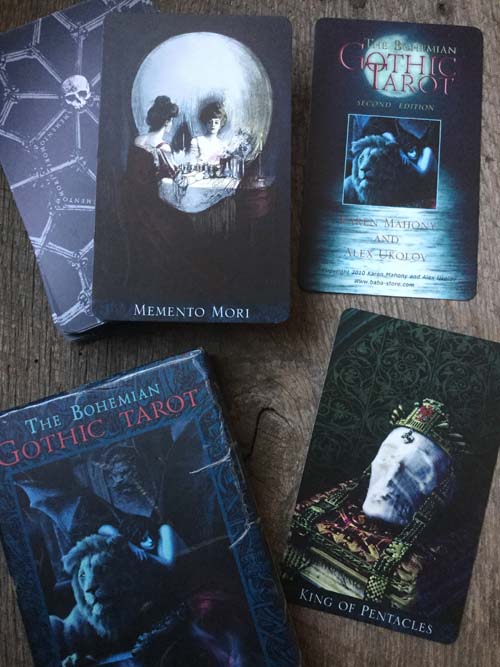 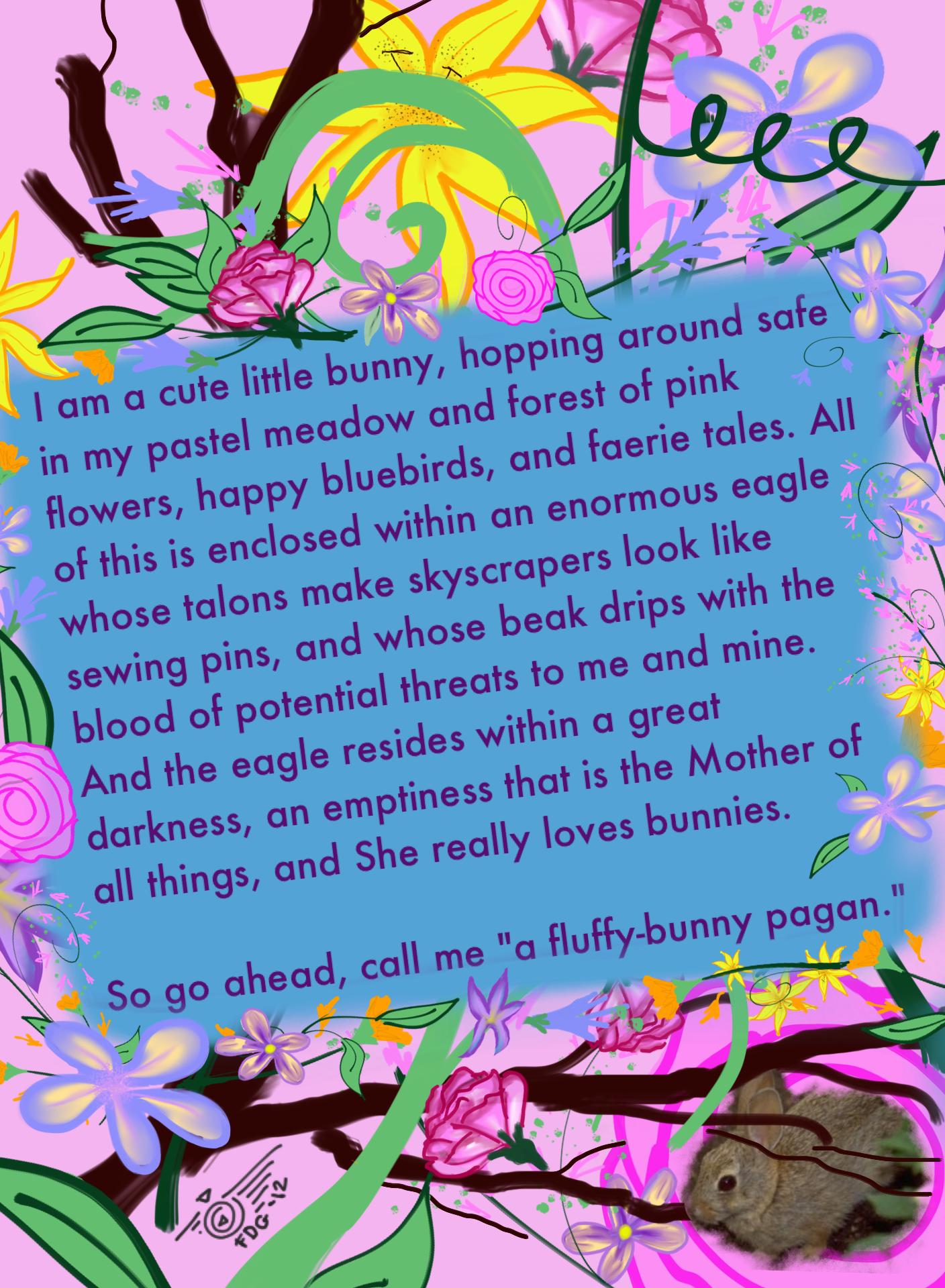 I had a ball making this look over-the-top cute, kept adding and adding pastels and flowers and pretty-pretty, and then adding some more. The text on the print reads, “I am a cute little bunny, hopping around safe in my pastel meadow and forest of pink flowers, happy bluebirds, and faerie tales. All of this is enclosed within an enormous eagle whose talons make skyscrapers look like sewing pins, and whose beak drips with the blood of potential threats to me and mine. And the eagle resides within a great darkness, an emptiness that is the Mother of all things, and She really loves bunnies. So go ahead, call me “a fluffy-bunny pagan.”

To my knowledge, no one has ever called me a “fluffy-bunny pagan.” But I dislike the term, and made this painting in support of anyone who’s been wounded by any kind of sarcastic remark about their spiritual path by other pagans. There are enough attacks on pagans without us attacking each other.

This is a digital painting, except for the photo of the wee rabbit in the lower right-hand corner. It was trance-painting; Spirit guides my digital brush, stroke by stroke. I am freed by this guidance. 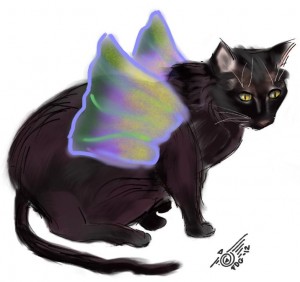 Dear site visitor, I want you to see the Faerie tale illustrations at their best. When WordPress shrinks a pic to fit the page, it blurs. Please click on a painting to see it unblurred; it makes a real difference.

Part Three
When she grew up, something else wonderful happened. That little girl grew up to be Goddess Diana—Great Mother, Light-Bearer. 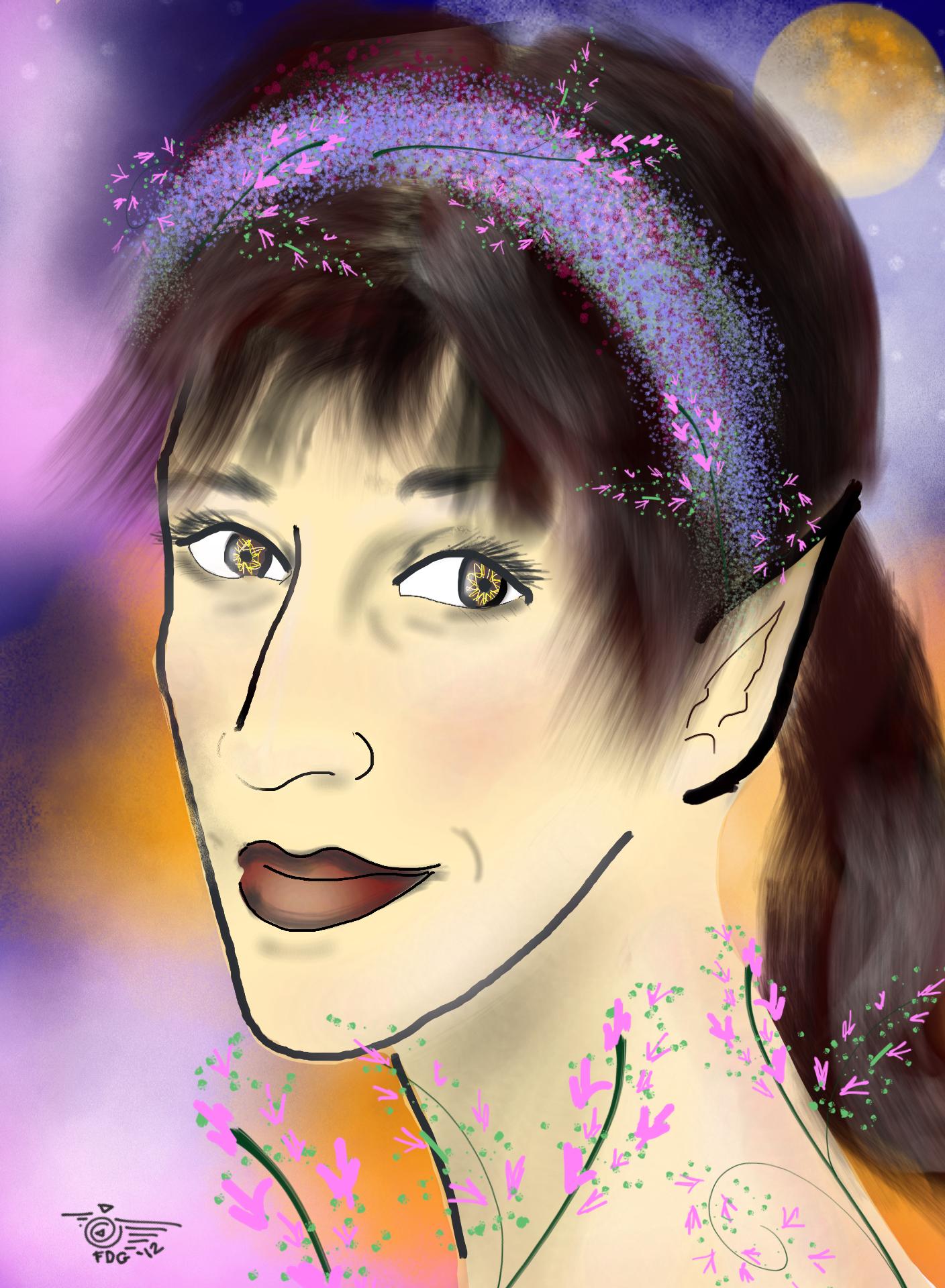 A child became a deity, yes. Yes, she did. Let yourself hide.

Hiding is not always about shame or fear. It might be a time of preparation or privacy, a time of beauty or empowerment, a time of nurturance or growth. 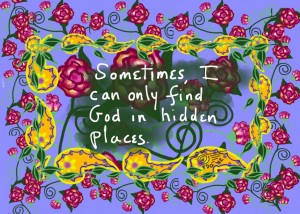 Hiding can be motivated by discretion.

A hiding child became a deity, a bearer of light, a light held high. The woman no longer hiding.

That little girl was always god. But she needed discretion to find it.

Diana lived with her cat who was secretly a Faerie. (See Aradia, Gospel of the Witches, for lore about Diana and her Fey Cat.)

The woman, the Goddess, hung a welcome sign on her front door. People came to see her. (Mind you, she still hid a lot of the time, and we will get to that in a moment.) She healed people with her light. Or tickled them with it. She used her light to guide others to their own shiny brilliance and to that of the Gods. 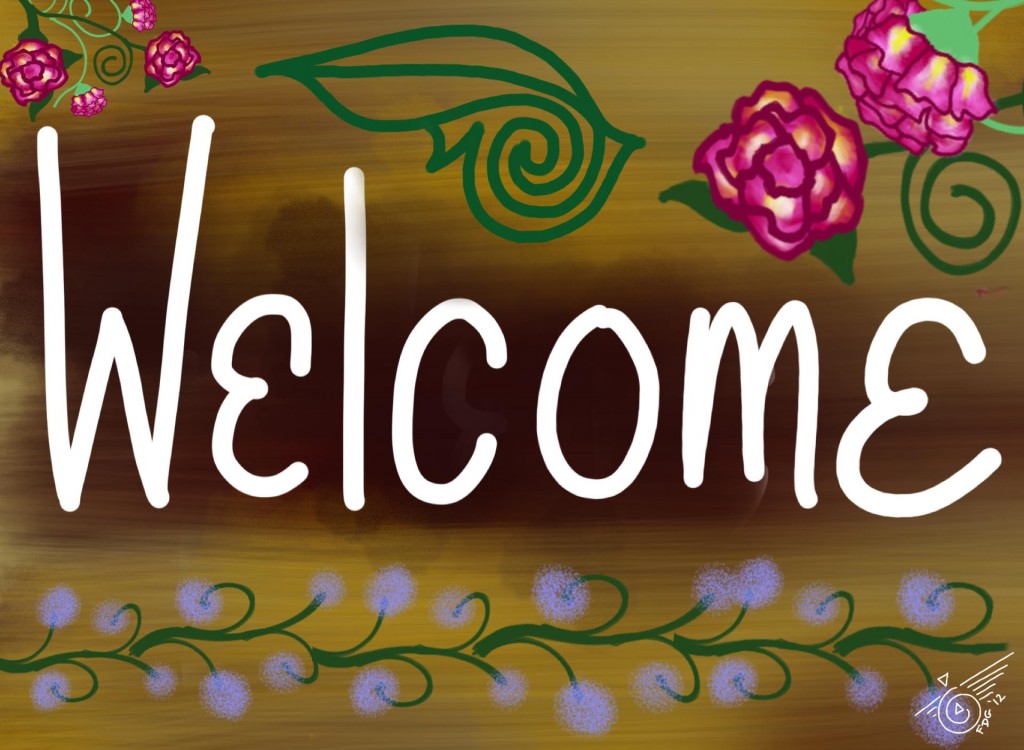 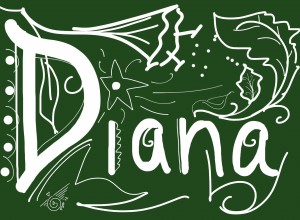 Diana is Goddess of Witches. This warm, protective deity has given me tremendous solace and healing many times over the years.

Often, her visitors hid with her. That was fun.

And sometimes—often, in fact—she still hid all by herself. Well, her cat was with her. As were other gods. They are always nearby.

Tucked in her home, she traveled to wonderful places. 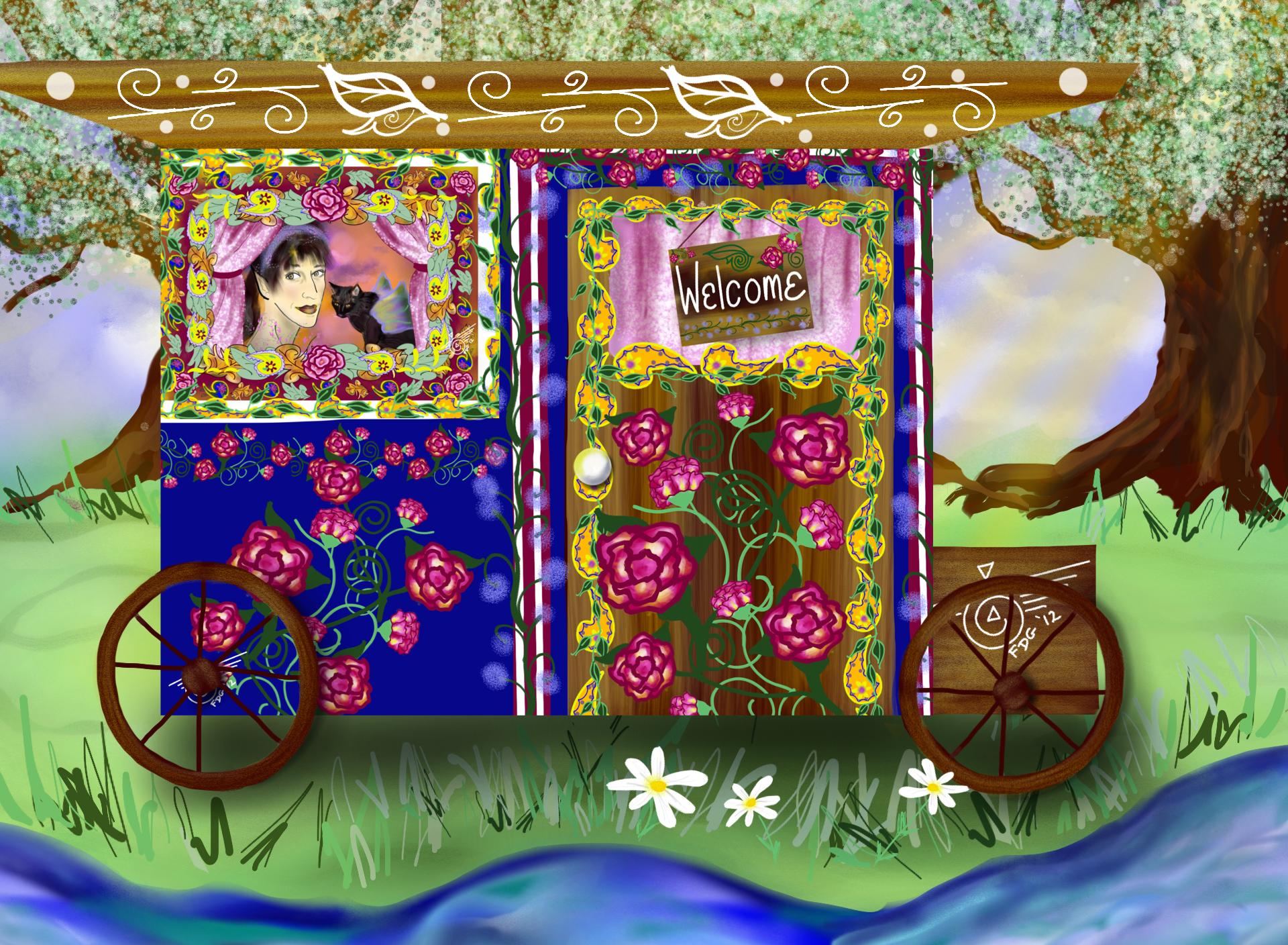 Her visitors went on great adventures with her, traveling between the stars. 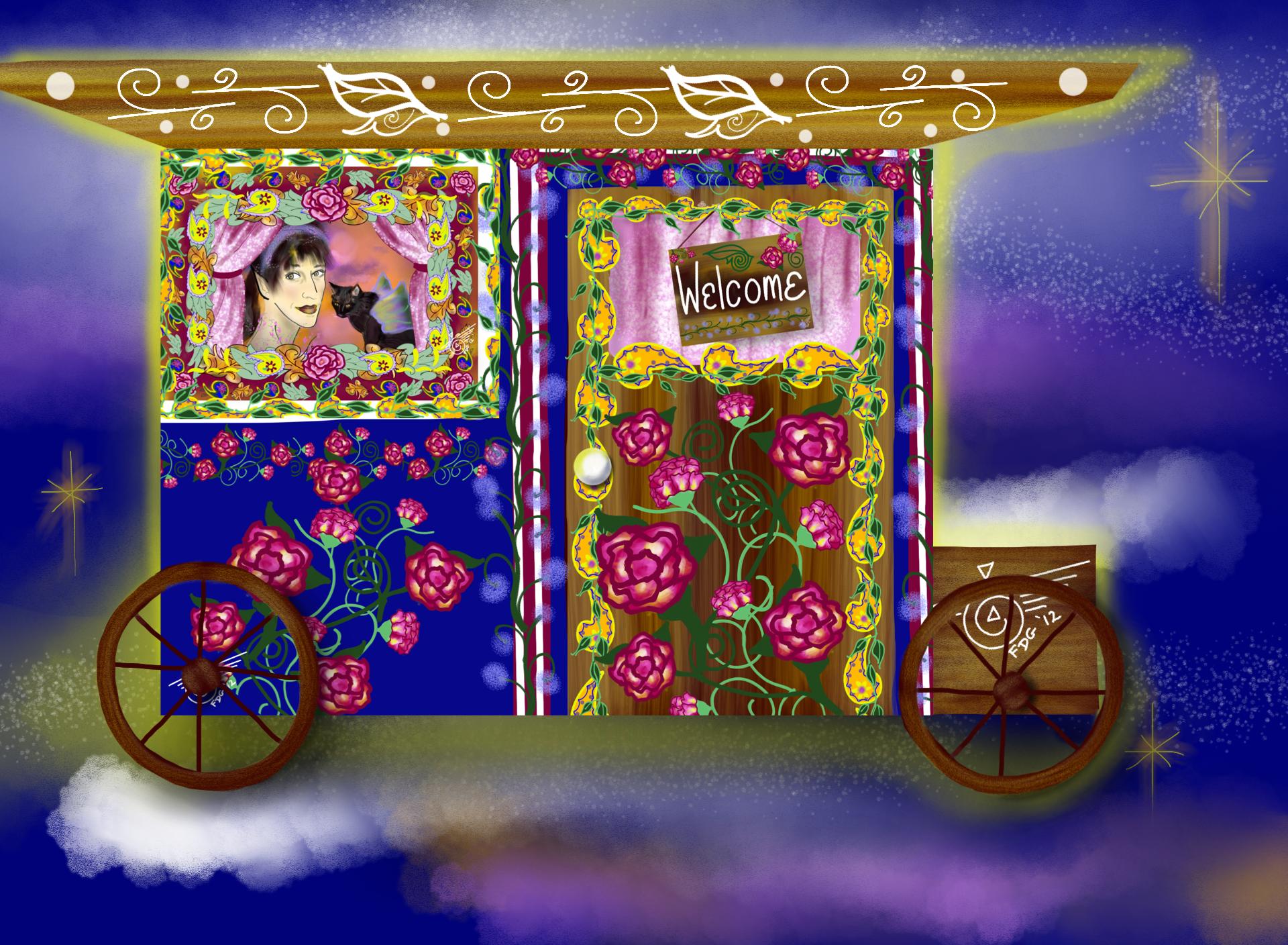 Where You and Diana Go if You Visit Her. Available as a limited first edition print. For more info, click on the picture.

When someone is hiding, I look twice to find the god. The end. 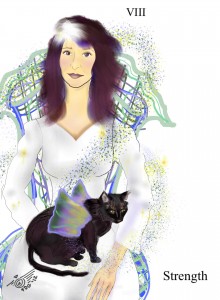 Storyteller (the author, self-portrait). Available as a limited first edition print. For more info, click on the picture

Please use the nifty Facebook, Twitter, and Google+ buttons, right below, to share my Faerie tale. Thank you for your support, it’s the only way many folks will know about my new story and refurbished site (the site you are on has been updated lately with a new look and all sorts of other new stuff). I cannot do it without you! If you do not see the buttons, you’re viewing this blog entry on my site’s home page. Just click this: https://stardrenched.com/2012/07/11/hiding-healing-power-pt-3/ 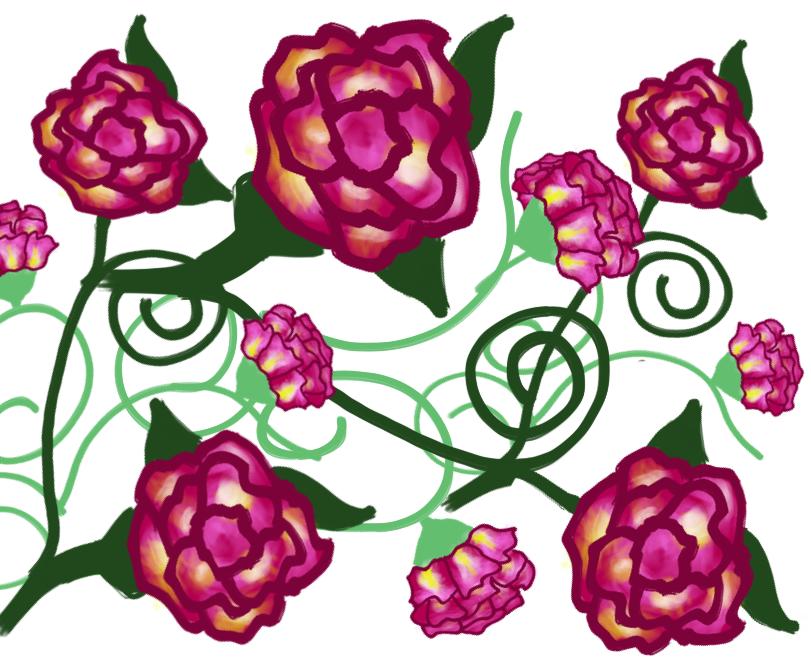 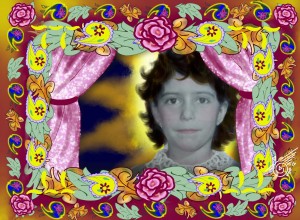 This little Italian girl is another example of someone hiding. Why do you think she is hiding?

Dear site visitor, I want you to see the Faerie tale illustrations at their best. When WordPress shrinks a pic to fit the page, it blurs. Please click on a painting to see it unblurred; it makes a real difference.

Everyone who hides has a story. What is yours? It is okay if you hide some of it.

Here is part of hers (she wants to hide the rest): When she first hid, she had a pretty place in her mind. She started building it. First, she made the window frame you see her peeking out of.

She lived behind it with her Faerie cat. She giggled there a lot. The cat dozed in brilliant shafts of sun light that came through the window. As she slept, she dreamt up schemes for the little girl. They had many adventures, and no one saw. Except other Faeries. So many giggles!

It took a long time, a lot of work, and a lot of hiding to build more. (Sometimes you hide to find quiet magic, so that you can even imagine secret places in your mind.)

For years, all she had was that window frame to hide behind. But it kept her safe. I mean, look at all the detail she put into it! 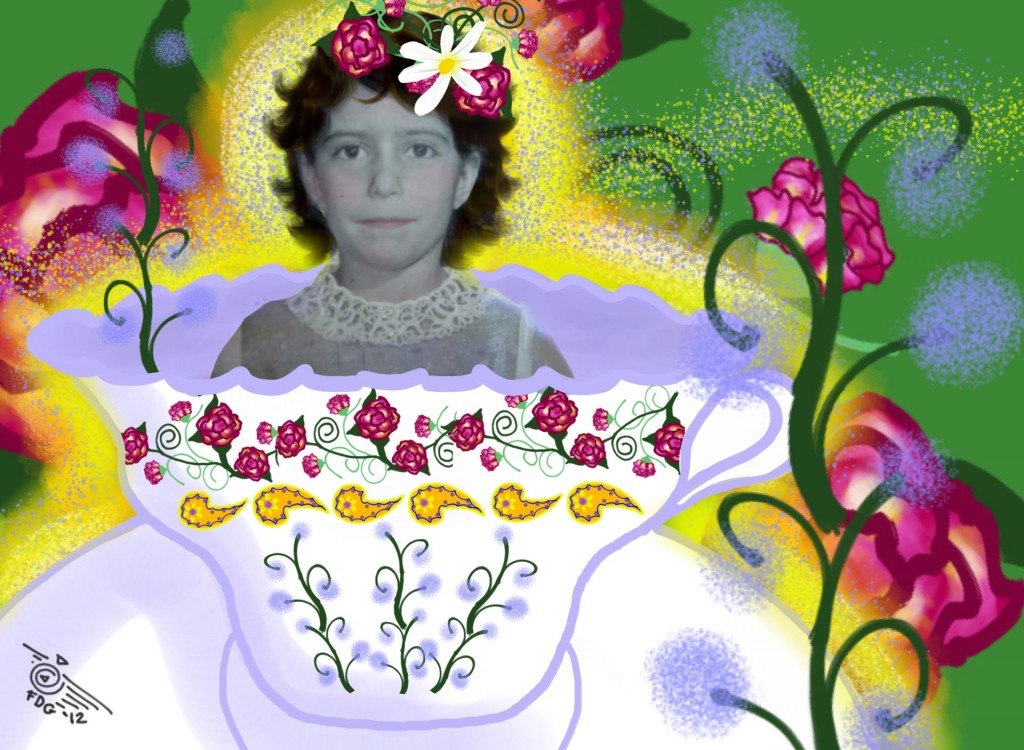 Little Bunny in a Tea Cup. Available as a limited first edition print. For more info, click on the picture

And by the time she had grown up, her home was finished. 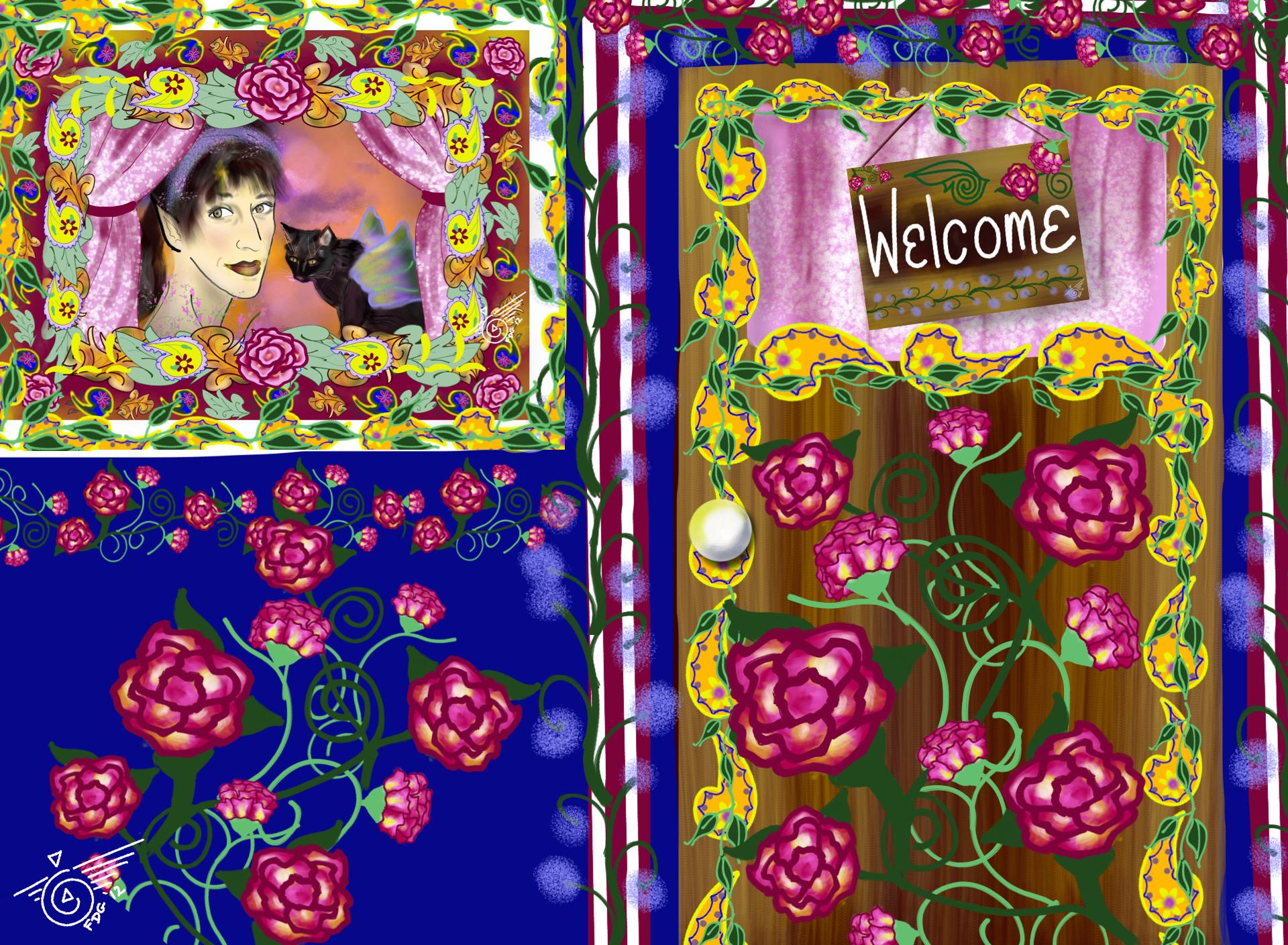 Want to know what adventures she had as a grown up? I’ll post part 3 in two weeks here. I blog once a week, and am alternating between this blog and the blog at my other site. Two blogs with two separate RRS feeds.

Please use the nifty Facebook, Twitter, and Google+ buttons, right below, to share my Faerie tale. Thank you for your support, it’s the only way many folks will know about my new story and refurbished site (the site you are on has been updated lately with a new look and all sorts of other new stuff).  I cannot do it without you! If you do not see the buttons, you’re viewing this blog entry on my site’s home page. Just click this https://stardrenched.com/2012/06/27/hiding-healing-power-pt-2/ 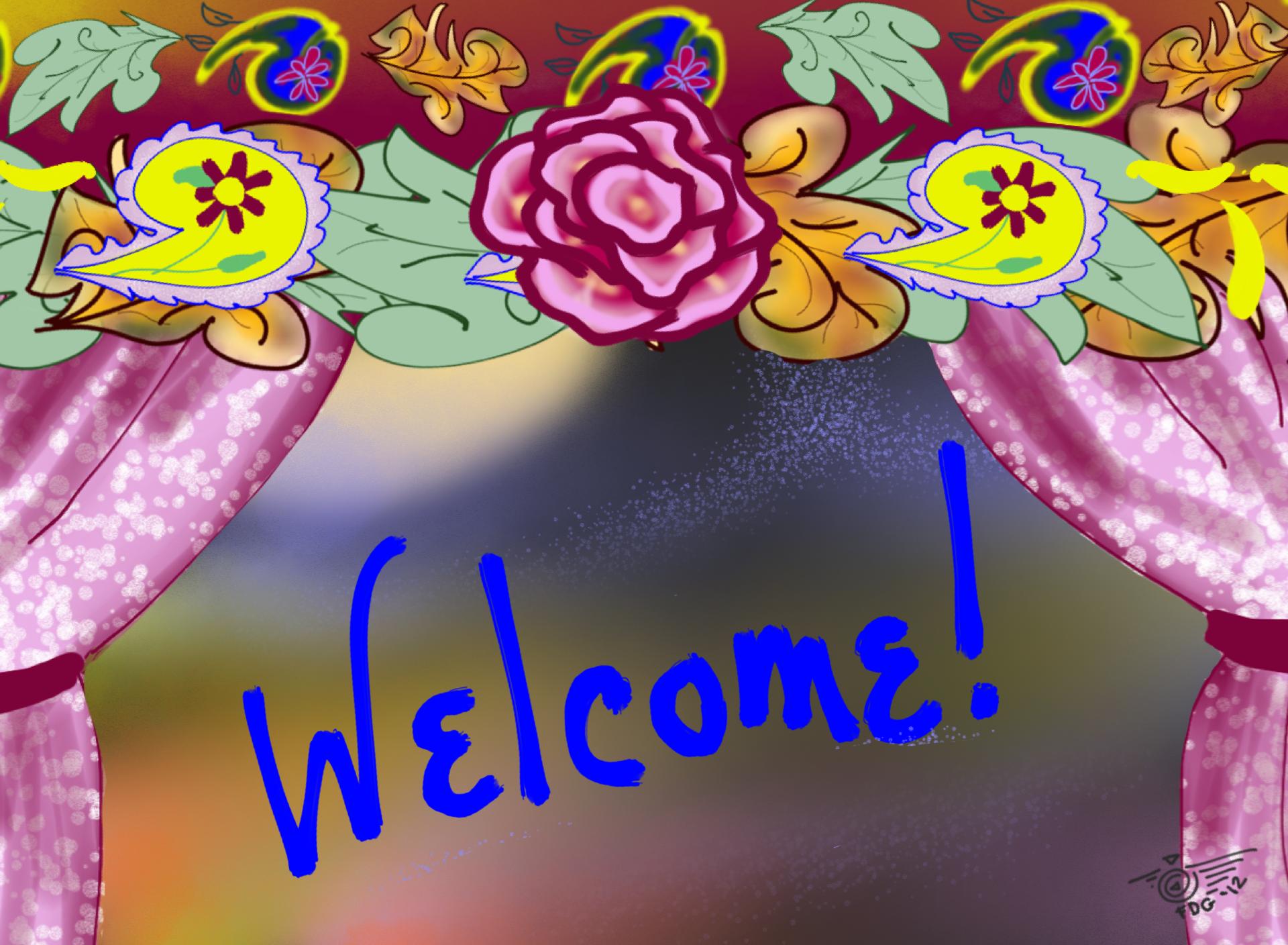 I call the following piece a Faerie tale. That is accurate but not by most standards. The piece is part my thoughts, part my paintings, part my methods for empowerment (perhaps in less overt forms, such as asking you a question), mixed with little magical stories told through word and visuals. By my definition of shamanism, that is a faerie tale: The sum total helps you live in myth—live in myth generally speaking, and in the particular myths I’m creating here, and in your own unique myths that this piece can help you find and/or better dwell in.

I painted the illustrations brush stroke by stroke—digitally. I just paint on a computer screen instead of a canvas. And with that: 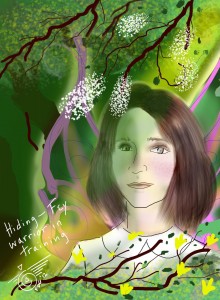 Hiding Fey Warrior In Training. Click on the painting to see it large and without blurring that occurs when WordPress shrinks a pic to fit the page.

This is a Faerie tale about healing and power. And about hiding. This story is for grown ups.

Sometimes we need to hide. There are many reasons. We might have to hide because we hurt. We find a safe, secret place to heal, or at least to be away from whatever might hurt us.

Do you ever hide? Do you need to tell someone why? Or is it better that no one knows you are hiding?

Sometimes we hide because it is fun.

Sometimes we hide to be alone with our thoughts.

Or with our “imaginary” friends.

Hiding, Faerie Healer in Training. Available as a limited first edition print. For more info, click on the picture.

When children have to repeatedly hide to protect themselves, it can injure their spirit in ways that haunt them into adulthood. But they’re doing the best they know how to keep themselves safe, and that is an act of power.

Hiding can also be an act of power when motivated instead by happy events and sweet wishes. We don’t always stay out of sight because of fear and pain; for example, you might simply tuck yourself away in a special place for a while, in order to flourish undisturbed.

Some people hide to gain powers that only come where no one—without those powers—can see them. They work hard and often joyfully, secretly doing what the Cosmos asks of them. That is what this little Fey fellow is doing—he is a Faerie healer in training.

And perhaps he is also making himself safe from trouble; if you ask him sincerely, he might tell you. Or maybe he’ll just keep peeking out at you from his hiding place.

I’ll post part 2 in two weeks, here. I blog once a week, and am going to try alternating between this and the blog at my other site. Two blogs with two separate RRS feeds.

Please share the URL to my above story; here it is to copy and paste for Facebook or an email or whatever: https://stardrenched.com/2012/06/13/hiding-healing-power/    I want folks to know about my new Faerie tale and my refurbished site (the site you are on has been updated lately with a new look and all sorts of other new stuff). Thank you for your support. I cannot do without it, truly! Oh, wait…I am so 20th century! Unless you’re viewing this blog entry on my site’s home page, you can like my Faerie tale with the nifty Facebook button, right below, next to the Twitter button and the like. Duh!